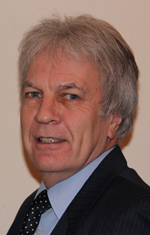 Ian Haworth is the General Secretary and main representative for CIC. He is responsible to the trustees.

Ian has worked full-time as a specialist in cultism since 1979. Initially, he worked in Canada before returning to Britain in 1987, when he helped to start CIC.

He is an ex-cult member, so he learned about cults the hard way! He has handled over 20, 000 enquiries and delivered over 1,200 talks on the topic.

He has acted as a consultant to police, social agencies, educational and religious institutions, as well as being called as an expert witness in cult-related trials.

If you shop on Amazon, then there is a new way to support Cult Information Centre without it costing you any money. By always accessing Amazon in future, via the Amazon Smile link, you can shop for items as before, but Amazon will donate a small percentage of their profit to our charity. All you have to do is click on https://smile.amazon.co.uk/ and indicate 'Cult Information Centre' as your chosen charity and you'll be helping us from then on, as long as you access Amazon each time by the new link.

We are sorry that no more booklets can be purchased until after the Coronavirus pandemic is over.

An order form can be downloaded here.

As the pandemic continues, we are still here to take your calls during the usual hours